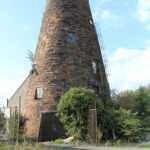 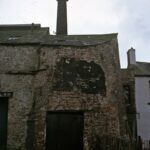 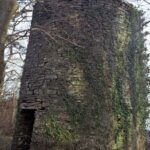 Although Cumbria is better known for its water powered mills, there were – especially on the lowland fringes – other mills that relied on the wind to generate power.

In an article published in 1972, J.E.Hughes listed 25 “vanished mills” that he had identified in the county of Cumberland, along with another 7 for which there were “visible remains”. The article, which can be read on-line via the Cumbria Past website , includes the known evidence for each mill along with its location, as well as background information on the subject. 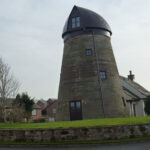 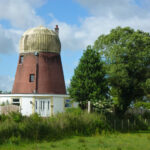 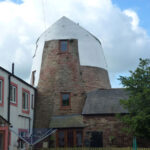 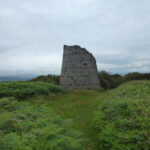 No-one seems to have carried out similar in-depth research for the other areas now included in Cumbria, that is Westmorland and Lancashire North of the Sands. The Cumbria HER, however, lists two on Walney Island – Walney North End and North Walney; Eccle Riggs at Broughton-in-Furness; Crossgates near Dalton-in-Furness; and Colby near Appleby. Mike Davies-Shiel photographed a possible site at Lowther, and referred to another in Kendal (by the river, for grinding bark for the tanneries). There is map evidence for a second mill at Broughton-in-Furness.

Most of these were stone-built tower mills, but Melville reminds us of the relatively common use of the steel frame wind pump towers used to supply water to farms (Blasterfield Farm, Orton Scar), industry (Greenodd), and at least one village (Baycliff); and out of mines (Plumpton near Ulverston).

Present-day windmills can be seen generating electricity around the county and off-shore.