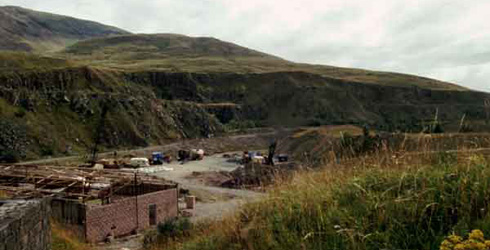 The building of the Lake District

Imagine thick layers of materials – mud, sand, ash, lava, and more – laid down over millions of years, new on top of old. Imagine the materials in these layers changed by heat and pressure, and then squeezed up into a dome. Imagine the top of the dome eroded by weather to expose the oldest layers in the centre, whilst remaining covered by the newer layers further out.

This picture of how the rocks that make up the Lake District got to be where they can now be found is of course very much simpler than what happened in reality. This is not the place for such complications, but the Cumberland Geological Society in their guide to the Lake District  describe a useful model that adds a little more colour to the basic picture, relating the stages of deposition of materials, and their folding and erosion over the past 500 million years. They also give a useful reminder that our region’s position has changed over time during this period, both in terms of how close it has been to the equator, but also relative to sea level – sometimes above, sometimes below. The sequence of events in the model is as follows:

Cumbria sites listed in the MMP Step Three report on the quarrying industry:

315 sites throughout England and Wales are listed. 14 are graded +++, 5 of them in Cumbria

+++ Site of exceptional national importance, for which statutory protection will almost always be appropriate, and preservation will be of high priority

++ Sites of clear national importance, for which statutory protection will normally be appropriate

+   Sites of national importance, but of lesser priority for resource allocation

R  Sites of regional rather than national importance for this industry

0  Sites which are believed to have been destroyed, or never existed at the location reported

FURTHER READING
The quarries of Lakeland : David Glover, Bookcase (Carlisle), 2014
You can read more about Lake District quarries and their location by following the links to limestone and slate and brick-making
Quarrying in Cumbria : David Johnson, Amberley Publishing, 2018
Strategic stone study for Cumbria