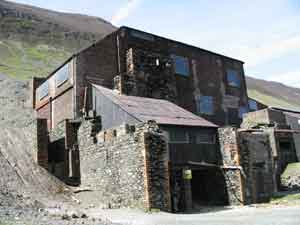 A mill has been on site at the mine since 1840, moving in 1908 to its present location at a height of 900ft.. Over the years the mill has been rebuilt and the machinery renovated and renewed. What remains today dates from its last occupation by the New Coledale Mining Company, whose main target was zinc.

Over the years 60,000 tons of barytes, 1248 tons of zinc, and 624 tons of lead (containing many ounces of silver) have been extracted from the mine. The job of the mill was to separate these minerals from each other, and from any other minerals and the country rock. Although the mill was built into the hillside so that gravity could help with movement of ore through the various processes, in reality it was moved up, down and around as required in order to achieve the end result desired in the space available. 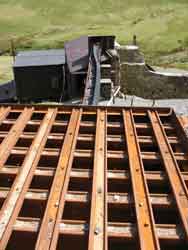 The ore from the mine was first dumped on the “grizzly” – an iron grid designed simply to screen out lumps of rock that were too large to begin the production process. These would be broken up and returned to the grid.

From beneath the grizzly the rock was moved by conveyor belt inside the mill to the jaw crusher – heavy machinery that began the process of reducing the size of the ore particles. Any coarse material was screened out and returned to the crusher.

The finely crushed ore was next delivered to a four compartment jig which made use of the different specific gravities of the different minerals in the ore to separate them out through agitation in water. The heaviest minerals – cadmium and galena – would drop first, followed by pyrite and manganese, then zinc and barytes. Light country rock that remained was destined for the waste tip.

Then the zinc and barytes were crushed to powder in the ball mill – a cast iron cylinder holding 4-5 inch diameter steel balls which ground the concentrates from the jig as it revolved. 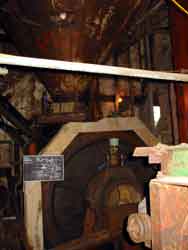 To separate the zinc from the barytes, the finely crushed powder next went through a flotation process whereby a carefully calculated mix of oils was added to a slurry of powdered ore and water. The oil was attracted to the zinc mineral particles and was helped to float to the surface through the introduction of gas bubbles into the mix. The bubbles were creamed off from the surface, filtered and dried. The barytes slurry that remained was pumped to a separate flotation cell to begin a similar process.