From an article by Mike Davies-Shiel from February 2000, published in The CIHS Newsletter, April 2011 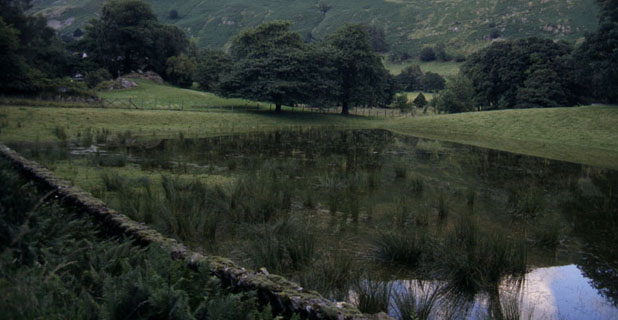 Follow this link to see more photos of the flax industry.

Flax has been one of the essential textiles from at least Bronze Age times. The process of converting thin wiry stalks into a whole range of products is complex, and long perfected. The sequence:

1. Traditionally, in early August, it was pulled so that root fibres were part of the crop, and a good handful doubled over into small beets about 18 inches (45 cms) long, then put in stooks and dried.

2. By late August the crop was dry enough to be rippled or broken using a swingle-staff (flail) above an old wagoncloth to knock off the seeds so precious for next year’s crop or as poultry food or for oils, paints and varnishes.

3. Then the beets were crammed into a specially constructed retting pond (aka steeping dub in Cumberland), in such a way as to hold in place under flat stones, so that when water was let in they were held below the surface and rotted for 2-3 weeks. Hemp (one quarter of an acre minimum grown per township by law) also went through the same treatment, often in the same pond. To make the job easier to do, ponds were flat-floored, just over knee-deep when filled, with vertical solidly built sides. By a law passed in 1541 the ponds – once the crops were removed – had to evaporate away and NOT drain back into streams. A working pond was often roadside for access and one well-built side, not more than 30ft/10m wide and 100ft/30m long, with the water accumulating through complex systems off nearby fields.

4. By mid-September they were taken out. The minion doing this obnoxious job had to avoid getting his face in the now poisonous water. The beets were once-again dried, often over small fires. The rotted stuff began curling off. Once dried, they were scutched.

5. Scutching stripped off all the dried gunge by beating the fibres strongly, eventually leaving wiry fibres, short and long

6. Scutched fibres were then held carefully in handfuls and dragged forcefully through vertical metal hook-tipped needles, set in boards, such that the crop was combed out into the long line fibres which would make linens, from the short tow fibres used for sacking and especially sailcloth. This process is called heckling. It required skilled delicacy to do well.

7. Then the fibres were boiled to make them soft enough to spin, and…

8. Woven on fairly narrow looms. Sailcoth was always made in strips of about 2ft/60cm width, and then sewn together by sailmakers. 100% pure linens such as kerchiefs, shirtings and damasks were worth most, but in all cloths – except silks – made from the 1600s until 1784, linen had to be the strong warp threads. This was because makers were well aware of the tendency for cotton and woollen goods to come to pieces in the harsh washing processes of the time. Also, 100% woollens take a deal of drying. Thus by the 1690s, new linsey-woolseys were the rage, being cloths dyed in the threads and thus patterned by the weave. Flax and cotton cloths were known as checks, calicoes and fustians. However, before or after weaving, flax kept its natural grey-green colour, and if brighter colouring was wanted it  had to be …

9. Bleached. The best bleach was made from unlikely products, including ale-drinkers’ urine. Best bleaching was done in the stocks of fulling mills using hot water, followed by …

10 Beetling – pummelling with flat hammers arranged like millipedes’ footsteps in waves. Then the cloths were dyed and sold.

There is an illustrated description of this process on the Cartmel Peninsula LHS’s website here, and a group of their members have written about flax growing and production in the local area:- “A note on aspects of the flax and hemp industry….”, Transactions of the CWAAS, 2021.