From the article ‘by D.J.W.Mawson in The Transactions of the Cumberland and Westmorland Antiquarian and Archaeological Society for 1976, by kind permission of the author and the society 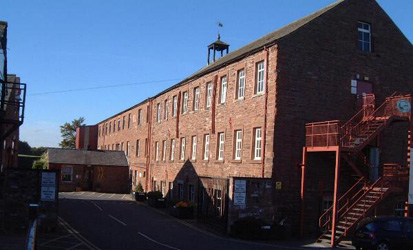 If the emergence of Carlisle as an industrial centre is to be attributed to a specific period, this must be the decade of the 1790s, for it was during these years that the foundations of the local spinning industry were laid. Indeed, within fifty years the district had become the fourth most important cotton manufacturing area in the United Kingdom. By 1847 there were four large spinning mills in Carlisle, two more at Dalston, and one each at Warwick Bridge and Cummersdale. In the last village there was also a substantial calico-printing establishment, and in the city itself no less than eight weaving factories and several bleaching and finishing works.

On 20 November 1790 Philip Howard of Corby Castle, with the concurrence of his son Henry, leased Lowfield, a 6-acre site adjoining Langthwaite Farm, Warwick Bridge, to John, Richard and George Ferguson, sons of the late Richard Ferguson (1716-1787), a check manufacturer who is believed to have occupied rooms beneath Carlisle Town Hall in 1746

Lowfield lay conveniently between two small streams, Cairn Beck and Trout Beck, which converged a few hundred yards downstream to become a minor tributary of the Eden. To run for 99 years from the ensuing Candlemas, the lease not only gave the Fergusons the right to build a mill and waterwheel with all necessary mill-races, sluices and weirs, but also granted them exclusive use of the Cairn Beck. Should they wish so they might also tap the Trout. During the first 21 years the annual ground rent was fixed at £9, but thereafter it was to rise at regular intervals until after 63 years £24 a year became payable.

The brothers took a little over two years to build the mill and a 700 yard mill-race to harness the Cairn. Around the mill were sundry ancillary buildings, including warehouses and dye-houses. The factory contained 443 spindles, and in a short space of time was producing 800 lbs. of yarn each week. However, during the early hours of Thursday 8th August 1793 a fire broke out which destroyed the main building. The Fergusons rebuilt (the property being insured with the Phoenix fire office). Their new mill, measuring 66 feet by 33 feet in ground plan, contained three floors as well as an attic. The waterwheel which survived the fire was mounted in the south-eastern gable, and if, as seems likely, the factory was now equipped with water-powered mules, it must have been among the most modern in the country, since these had only become available towards the beginning of the decade.

Before 1798 it is evident that the Cairn coped adequately with the mill’s power needs, for the firm had not invoked the licence to tap the Trout. However, that year the brothers took steps to safeguard the future. A lease of Langthwaite Farm was negotiated with Henry Howard, who also consented to the construction of a reservoir in the land lying between the factory and the farm. Although agreeing that this should be fed by a cut from the Trout, Howard made it clear that the water supply to his corn mill downstream was not to be jeopardised. For the time being the Fergusons were content to have secured the additional rights. They did not seek to exercise them immediately, and although a mill-race from the Trout was constructed in 1806, no reservoir was built during their occupancy.

John Ferguson died in 1802, but his brothers continued the business at Langthwaite until 1809 when they leased the mill for seven years to their brother-in-law, Peter Dixon, and his sons. An inventory of 1808 shows that by then the mill contained 1,064 spindles. Having by 1814 secured a longer tenancy, the Dixons carried out their ambitious plans to extend the factory by the addition of a new wing, four storeys high with an attic. New cottages were built, and so was the reservoir authorised 16 years earlier. In 1822 the Dixons undertook improvements to the mill-races, but in 1832 the complete dependence of the firm upon water was diminished with the installation of a steam engine, supplied by Peel, Williams & Peel’s Soho Works, Manchester. This was evidently part of a more general re-equipment which included the installation of the new Danforth Throstle spinning machines.

As the firm’s new factory in Carlisle neared completion, early in 1836, an attempt was made to dispose of Langthwaite. There appear to have been no takers, however, and Peter Dixon & Sons stayed on. From time to time the under-lease was renewed, but business suffered with the American Civil War, and in 1872 the partners were declared bankrupt on their own petition.

A joint stock company, Peter Dixon & Sons Ltd, was floated almost at once, and on 20 January 1873 it purchased Langthwaite Mill with all its engines and machinery at a cost of £13,000. Although the mill itself stayed idle, the adjoining dye and bleach works, containing over 300 iron dyeing vats and 17 indigo mills, driven by a condensing engine, a waterwheel and two turbines, were fully employed on finishing work for the firm’s Carlisle factories which the company had also acquired. The company surrendered the lease in 1885, having ceased to trade two years earlier, and in 1888 the property was sold to Messrs William Waddell & Son, woollen manufacturers.