From the article ‘The Eskdale Copper Mine’ by Albyn Austin in The CIHS Newsletter, August 1990 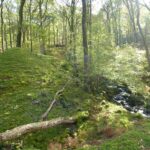 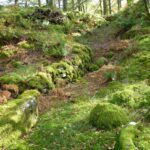 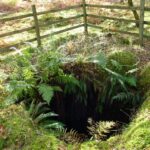 Eskdale is well known for its iron mines and the railway built to serve them – the Ravenglass and Eskdale Railway. Less well known is that the dale also contains a copper mine. The mine is only small, but remains much as it did 100 years ago. It is situated in a very pleasant gill under Harter Fell, about one mile down the dale, west of the cattle grid at the bottom of Hardknott Pass. Leave the road at the footpath at Whahouse Bridge and proceed to Spothow Gill about GR 205004.

In the trees is the tip from a low level which is open to an air shaft at the south edge of the wood. Above the trees are the foundations of a building and a tip on the edge of Spothow Gill. The mineral vein runs NW-SE on the west bank of the gill. Two levels have been driven on it, the lower can be found in the east bank of the gill just beyond the tips. It runs under the stream, driven presumably in the hope of cross cutting a more promising vein. The upper can be reached with a scramble up the gill or by following the ruined remains of a rail track built on an artificial ledge. Both levels connect into opposite ends of a small stope, about 30 feet high. Traces of iron pyrites can be found in the vein, and small amounts of iron-copper (chalcopyrite) exist on the tips. Below the mine the gill has been diverted with a dam, and the eye of faith can see remains of a dressing floor. Part of an old iron gear wheel was found there some years ago and is now in the Whitehaven Museum. At the low level a length of L-shaped railway track still remains. 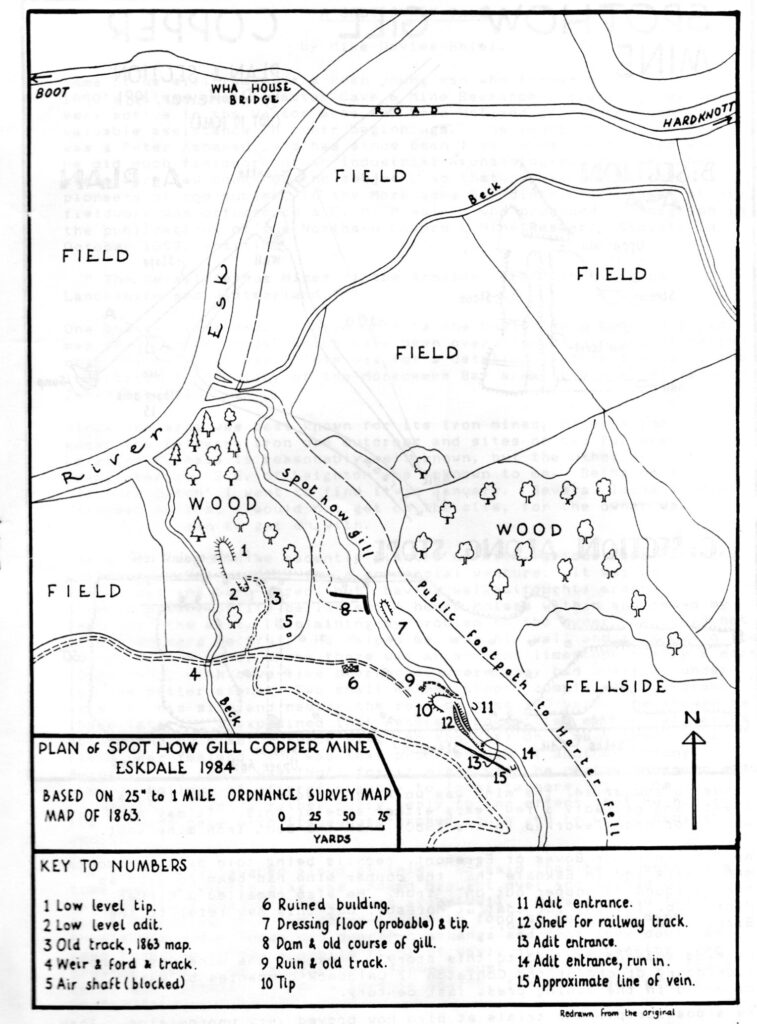 Little is known about the mine’s history. Hutchinson in his 1794 history notes that veins of copper exist in Eskdale but no mine as yet exists. The 1841 census lists seven miners in the dale, but these could be iron miners. The Jefferson county history in 1842 repeats Hutchinson, and the 1847 Mannix and Whellon directory includes nothing. The 1851 census lists three iron miners and two miners (unspecified). However the 1856 annual report on the mines of the Leconfield Estates notes a copper trial at Bird How “almost due north from the Birker Copper Mine in Mr Stanley’s Royalty”.

The 1861 census lists four copper miners, two iron miners and two miners. The copper mine’s manager or captain was 63 year old Joseph Harrison from Caldbeck. He was assisted by another Harrison from Caldbeck (probably his son) and two other miners, one born in Keswick and the other in Longdale. The first series Ordnance Survey map of 1863 shows the mines much as they are today with rail tracks coming out of the lower and middle levels. The Gill however still followed its original course, and no track from the top level is marked. In the 1871 census only two miners are recorded, one of whom was managing the Boot iron mine in 1873. The 1881 census lists about 50 miners, though these seem to be associated with the mine at Boot. However the 1883 Bulmer History and Directory still states that the Birker Copper Mining Co. is working copper in Eskdale. By the time of the second Ordnance Survey map of 1865 the mine seems much as it is today and is marked “Old Copper Mine”.

Thus, to summarise, the mine was working between 1856 and 1863 at least, and probably a few years either side of this. It may also have worked or been reworked in the 1880’s when the Boot iron mine shut.