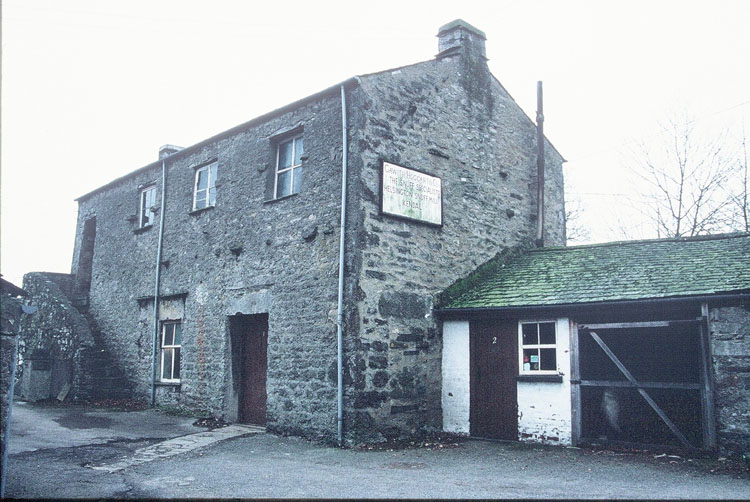 Click here for an introduction to the industry and photos of the mill.

The Helsington Laithes Mill is situated on the west bank of the River Kent approximately one mile south of Kendal (NGR 514904). There has been a mill on this site since the 13th century – the earliest records date from 1253. The older building was used as a corn mill until 1770, when marble polishers occupied the site. Gawith Hoggarth first came to the premises in 1840, and much of the present gearing and pulley wheels are survivors from the original equipment, as built.

Sixteen members assembled at 2pm on a beautiful summer afternoon, outside the main building. Several of the party had first taken the opportunity to examine the head of the leet, situated about a quarter of a mile upstream. The water leaves the river from the top of a weir, and is carried in a culvert to the mill. Mr Alan Powley who, together with his apprentice, produces about half a ton of snuff each week, met us and guided us through the process.

Briefly, snuff manufacture involves blending and drying tobacco which is then ground with the addition of various salts. The prepared snuff is then blended with flavours, scents and essential oils. It is mixed by machine and by hand, and then it it sieved and bagged.

On entering the larger building, our first view was of a large pestle mill. Almost as tall as the building, it consisted of four mortars, each with a pestle driven from above by gearing from the waterwheel shaft. Two of the mortars were three-quarters filled with snuff – normally all four would operate together, but due to the dry weather there was insufficient water pressure to maintain this production level.

This type of mill is used for wet grinding, which gives more flavour to the final product. The blended tobacco is usually ground for one and a half days, but this depends to some extent on the moisture content of the blend. This pestle mortar was obtained from a Scottish gunpowder works, and installed at the present site in about 1845.

Alternatively, a ball mill can be used for the grinding process – this is a more efficient mill but it is a dry grinding process. This mill consists of 28 steel balls of assorted sizes, which tumble through the tobacco, grinding it, as the drum rotates.

After being ground, the mixture is transferred from the mortar to a paddle mixer, where moisture, salts and flavouring agents are added. It is mixed here for about an hour until the correct texture and flavour is achieved. The snuff is then sieved through an 18 mesh sieve and bagged into sacks. Some snuffs are sent straight for packing, whilst others are first allowed to mature for two or three weeks. All packing is done at the Lowther Street factory. During our visit “Strong Kendal Brown” snuff was being produced, which has ammonia added, and most of us were glad to escape outside for fresh air!

Next we were shown the power source – an undershot paddle wheel – which produces 12 horse power with a full head of water. There is such a resistance in the pestle mill that it cannot be started with the mortars more than half filled, otherwise the paddles of the wheel would shear. The water leaving the culvert is regulated by a sluice gate at the point where the flow is diverted onto the head race. The wheel rotates anticlockwise, and I counted 24 paddles. The tail race leads back to the river. After inspecting the wheel, the floor covering in the mill was removed so that we could view the gearing wheels. These have brass and white metal bearings, and need oiling on alternate days.

Next we were shown the selection of oils and flavours used in snuff making. 85% of the production is mentholated snuff, with other more specialised blends making up the total. Eight or nine standard bases are produced, and these are blended with different flavours to achieve the final product. The most common flavouring agents are menthol, camphor, and spearmint. Artificial camphor is now used since true camphor is relatively scarce and hence expensive. Others include lily of the valley, jasmine, hyacinth and cinnamon. There are no recipes – Mr Powley  uses his skill and experience to decide how much of which flavours, salts and essential oils to add to each batch.

Lastly we were led into the older, smaller building which is used as a tobacco store. Here there were rows of wooden chests, full of broken leaves labelled Zambian, Brazilian, Canadian – tobacco from many countries. Until twenty years ago whole leaves were used, but now the tobacco leaf is chopped in the country of origin – broken pieces are cheaper, and often it is cleaned ‘waste’ from the cigar industry. This of course reflects the likely birth of the snuff industry – it provides a use for the leaf pieces damaged in the long journeys by pack horse from the coast to Kendal. The leaves are blended according to the product being made, and the leaf mixture is then dried in a floor drier prior to being milled in the larger building.