A report on a visit to Hartley’s Brewery in the CIHS Bulletin, December 1990

On a fine night, 10th October at 7.30pm, eleven devotees visited the Mecca of northern imbibers, Hartley’s Brewery, Ulverston. The assistant brewer met us in Brewery Street, and immediately took us to the visitors’ bar where we were refreshed in the traditional manner. With obvious enthusiasm for his craft Robin Richardson gave us an outline of the process and something of the history of the premises. There followed a video in which TV’s Brian Redhead explained the processes of brewing ale, lager, stout, real ale etc., and how much he enjoyed a good pint.

Known as ‘The Old Brewery’ in Ulverston, the oldest portion of Hartley’s was built in 1755 and is now used as the raw materials store. In it we saw the old wooden malt sack hoist and tasted the sweetness of the malt.

The brewery was listed in the 1843 directory of Jackson’s Ulverston Almanack as Fell and Jackson’s of Brewery Lane; Thomas Jackson’s around 1850; then from 1871 it was occupied by John Booth & Co, Brewers and Maltsters. In 1882 the brewery was enlarged and in 1896 it was acquired by Hartley’s. The famous Hartley’s brews were developed after the First World War, and the present owners – Frederick Robinson Ltd, of Stockport, Cheshire – purchased the company in 1982.

The process of brewing dates from at least the 3rd millennium BC, and the basis of the present method has altered little in Britain since the 18th century when hops were introduced for flavour.

The staff at Ulverston consists of two qualified brewers, five brewing operators and five who wash the casks. The well-known XB recipe was developed by Mr Eric Simpson, now retired, who lives close to the brewery.

The raw materials are hops from Kent and the West Country, malt which consists of germinated barley, sugar, gypsum and of course water from the town supply or well. The feed system relies on gravity with one pump half way through the process to raise the liquid to the cooler.

First, hot water undergoes ‘Burtonisation’, by adding electrolytes such as gypsum to mimic the water from Burton-on-Trent. This is known as liquor. Milled malt is mixed with hot liquor allowing enzymes produced in malting to convert starch into sugars. The malt is mashed in the ‘mash tun’. Here the art of the brewer rules rather than scientific method. Wort is run off from the tun into a large copper wort boiler, and the spent grains are used as cattle food. Hops and extra sugar are added to the wort, and the whole heated by steam to extract the bittering resins from the hops and sterilise the liquid. The wort is separated from the hops and runs into a storage vessel – the hop back , is pumped up to a cooler then flows by gravity through a heat exchanger to open fermentation vessels. Yeast is pitched in and fermentation takes place. Heat and carbon dioxide are produced so cooling and adequate ventilation are necessary, and the sugars are converted into alcohol. Ales are produced with the yeast on the surface (top fermentation), and lagers use a bottom fermentation at a lower temperature. The beer is then allowed to mature.

Wooden casks are washed by a large mechanical washing machine, then filled. Real ale is distinguished by allowing the yeast to continue fermenting in the barrel. Before the barrel leaves the brewery isinglass – collagen from the swim bladders of sturgeon – is added. The yeast settles out and the beer is drawn off by the publican. Real ale does not keep as long as a filtered beer, but this is seldom a disadvantage!

All stages of the process were shown to us then we retired to the bar again for questions and more refreshment as desired. And a good time was had by all. 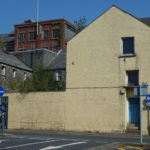 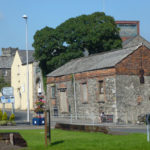 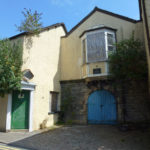 Eric Simpson, mentioned above, who worked for Hartley’s for 46 years until his retirement in 1978, wrote a series of articles for the Journal of The Brewery History Society in 1992. Here are some snippets from them, with kind permission of the Society.

On 21st October 1991, the last brew took place at Hartley’s of Ulverston, ending 250 years of brewing on the site. The boiler house, chimney and pumphouse were demolished around 1994.

See the Brewing History Society’s website for more photos and information, and …
Hartley’s in the 1980s : Nigel Snell, Homes for Ulverston, 2021