From an article by Graham Brooks in The CIHS Newsletter, December 1991 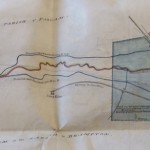 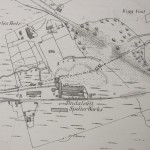 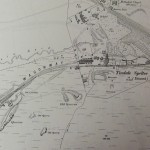 Nobody is quite sure why James Attwood chose Tindale (NY 617594) for the site of his smelter, but this site does offer a ready supply of coal which was provided from the Bishop Hill drift by self-acting incline. There was a ready supply of water power from Tindale Tarn, which was dammed to raise the level, and there was a supply of ore being stock-piled at the lead mines of Alston Moor.

The process of smelting the ores could use either Zinc Blende or ‘Black Jack’, which is the sulphide of zinc, or the carbonate known as Calamine. The first part of the process involved finely grinding the ore, which was then placed in a reverberatory furnace to convert the ore into zinc oxide. The site contained 28 reverberatory or calcinating furnaces. The zinc oxide was then mixed with small coals and packed into fireclay cylinders or retorts. These were heated strongly in coal fired furnaces, where at high temperature gaseous zinc was produced. This was distilled off into fireclay condensers, and the zinc was collected as a liquid. Each retort and condenser produced approximately 2 kg of zinc in 24 hours. In total the smelter has 912 retorts in 12 or 14 furnaces. The retorts only had a  short life, and were produced on site probably from clay extracted with the coal from local mines. The site also contained a warehouse, offices, and a manager’s house.

Attwood died in 1865, and the smelter was taken over eventually by the Nenthead and Tynedale Lead and Zinc Company Ltd, who had taken over the London Lead Company’s leases at Alston. In 1893 they began negotiating with the Earl of Carlisle to renew the lease of the smelter, but ran into difficulties regarding pollution control and social conditions for the workers.

The main waste product from the calcining process was sulphur dioxide, which – due to the low chimney – rapidly fell to earth, killing the local vegetation. The effects of this pollution could already be seen by 1857, and by 1882 the company was paying £65 a year in compensation for damage to the land. By 1893, 95 hectares of land surrounding the plant had been destroyed by pollution, and a further 61 hectares were being affected.

Other problems with renewing the lease included the fact that Lady Carlisle, who greatly supported the Temperance movement, was not happy with the type of workman attracted to the area by the smelter. She also considered that the living accommodation provided at the site was not suitable, and laid down specific conditions. These included minimum bedroom sizes – children under 12 years of age had to have 250 cubic feet, 12 to 18 years 400 cubic feet, and adults 500 cubic feet. Also cottages occupied by married men with a mixed family were to have at least 3 bedrooms, not including the kitchen. These specifications would have made any accommodation built to them luxury compared with other workers’ in the country.

The Company could not agree to these terms, and in the middle of 1895 the smelter closed, and the plant was demolished the following year. During its lifetime the smelter produced approximately 40,000 tons of zinc from 200,000 tons of ore, using approx. the same quantity of coal. The waste from the smelter occupies the triangular piece of land north of the site, bounded by the railway.

In 1928 the Tindale Extracting Company Limited was set up to extract white zinc oxide from the residues for sale to the paint industry. However, all zinc oxides produced were a dirty grey colour, and the plant closed in 1931 at a loss of £40,000. The process carried out was called “fuming”. The essential part of the process was a large rotary kiln, which stood at the top of the large concrete pillars now remaining on the site. The kiln was 30 metres long and 2.5 metres in diameter. Its steel shell was lined with refractory bricks, and the discharge end was heated by oil burners. Gas was drawn from the kiln by a 65 hp fan at a temperature of 700 degrees C. This was cooled by a passage through metal flues, until a temparature of 100 degrees was obtained. It was then blown into woollen bag filters, where the solids were caught. The plant stood idle until 1937, when it was recommissioned to extract cadmium from waste brought from zinc smelters in South West England. It only operated for 87 days before the lining failed and the plant was scrapped.

Today only the concrete pillars remain of the 20th century plant, which was built on top of the original smelter. A large amount of the waste was extracted for filling when Spadeadam was built. Examining what remains you will find parts of retorts and condensing tubes with  possibly two types of firebricks from the 19th century operation, and chocolate brown clinker from the rotary furnace. The railway continued to serve the coal mines at Midgeholme and Halton Lea Gate until the last major drift mine closed in 1953 and the line was scrapped.