An edited version of the article by R. John in the CIHS Bulletin for August 1990 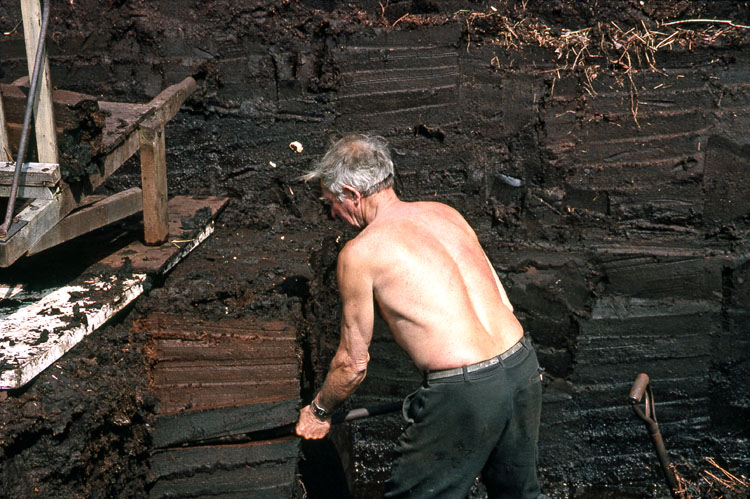 You can see more photos in the peat cutting gallery.

On Saturday 19th May, members of the Society were invited to witness the peat digging at Whitbarrow Moss – an extension of Foulshaw Moss in the south of the county.

When our party arrived, a small team was engaged in the May cutting, at an exposed face about twelve feet deep. The tool used is a sharp, narrow spade with an angled edge, which cuts a peat about 15cm long and 6cm deep as the digger moves across the face from right to left. The peats are then taken away on a flat barrow and are laid out in thousands to dry in the sun.

The actual digging site has to be drained carefully, and the first seasonal job for the diggers is that of cleaning the ditches and drains with which the digging area is criss-crossed. The ditch across the base of the present face was of course especially important in this respect.

The first layer of peat in the face is known as ‘fey’, and below that is ‘grey peat’, which is light and fibrous, and beneath that is ‘black peat’, the best quality. The bottom peats in the face are known as ‘short metal’, which is dark brown.

When laid out in the sun, the peats shrink by one-third to one-half. The drying process varies greatly in length, and in a dry year the peats may be ready for the fire in five or six weeks. When the open-air drying process is advanced, the peats are stacked in a ‘windrow’, with two flat peats and two more on edge above them, until one has a sort of honeycomb six or seven peats deep. This permits the air to circulate. Afterwards, peats can be put in wooden sheds with corrugated iron roofs where the peats can be built into a wall at the front, and then either thrown in or stacked behind in such a manner as to permit more air circulation. About a dozen sheds are scattered through the traditional diggings at Whitbarrow Moss. Peat can be stacked in the sheds for two or three years; normally, in the open, frost is the enemy of good peats.

The area allocated to each cutter is about 25 yards long and about 8 feet wide, and the peat bank or face can be cut back seven or so feet a year, with one man digging about 500 peats a year. These are enough to keep a fire continually burning in the hearth during the winter from late September to March. Some of the old hands burn wood in the hearth as well when that is available.

Two points of interest; this kind of peat is useless for garden purposes, at any rate in its cut and stored state. It would have to be burned to dust first, and is also highly acidic. Only the top ‘fey’ or ‘grey’ peats are useful for horticultural purposes. The other point of interest relates to the scent of burning peat, which was once common in Lakeland villages. It was quite unforgettable – 40 years ago numerous cottages in Broughton-in-Furness used it, and the scent of the locality was unmistakeable!