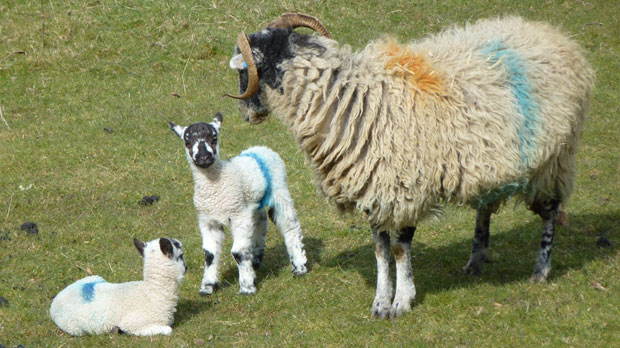 Farming is central to the rural economy of Cumbria. Directly, farming activities employ over 12,000 people on either a full-time (52%) or part-time basis. In addition they support a large downstream supply chain and a variety of upstream businesses. In 2016 DEFRA reported that there were 5,135 farm holdings in the county (4.8% of the total for England). The total farmed area in the county was reported to be 508,000 hectares (5.6% of the England total). The average size of Cumbrian farms is 99 hectares (England’s average is 85), with each employing on average 2.4 people (England’s average is 2.8).

In the county the predominant farm type in terms of land use is Grazing Livestock, with 56,000 head of beef and 2,035,000 sheep. This accounts for 71% of the farmed area. Next largest type is Dairy, which covers a further 16%. This holds the second largest dairy herd in the UK, with 108,000 head producing over 900 million litres of milk per annum. ONS data for 2016 shows that the agriculture, forestry and fishing sector in Cumbria generated £250m in gross added value (GVA) – 3.2% of England’s total for that sector – which is 2.1% of Cumbria’s total GVA. Common Agriculture Policy payments of £17.2m were made to the sector in 2016.

Agriculture shapes and manages the rural economy and environment of the county, both directly and indirectly. Farming and farmers provide the social glue in country areas. The farmed environment underpins much of the visitor economy and has defined the landscape to which 45 million visitors are attracted annually. Land management reform, and other changes to the way farming is supported and practiced, will have inevitable effects on the visitor economy and on the sustainability of rural communities.

Within the Lake District National Park lies 90% of the land within Cumbria designated as ‘Less Favoured Areas’. The open fells of Lakeland include the largest concentration of Common Land in Great Britain (112,900 ha – 16% of Cumbria’s land area). Here pastoral farming is characterised by sheep and beef rearing. The Lake District is famous for its native Herdwick sheep, and “Lakeland Herdwick” now has Protected Designation of Origin status. A distinctive communal system of farming, involving common land, hefting, field systems and drystone walls, has evolved over at least a thousand years. This cultural heritage and the landscape created by it give the Lake District its Special Qualities and the “Outstanding Universal Value” which gained it the inscription of World Heritage Site.

The vital importance of maintaining this traditional pattern of farming is currently being confronted by the realities of finance and environmental policies. Recent research, covering the decade to 2013, reveals the hard fact that on an average Cumbrian hill farm earnings are £8,000 per annum – less than half the earnings that an agricultural worker would expect. Moreover, while the average tenant farmer’s capital investment was over £280,000, the return on this capital was in many instances less than 0%. With such a lack of profit and absence of return on capital for new investment, these are not sustainable businesses.

There can be no doubt of the commitment of Cumbrian farming families to their traditional way of life, nor of their extraordinary resilience in the face of successive changes of government policy and the ravages of floods and disease. Much of the Cumbrian farming industry depends on external support payments. Hitherto, only the Single Farm Payment scheme and environmental payments have maintained the traditional farming economy that delivers the cultural landscape of Cumbria’s Lakeland that is so valued and funds any desired agri-environmental initiatives. With the UK Government about to assume full responsibility for the effective management of ecosystem services – food, water, carbon – as well as for cultural heritage and renewed biodiversity, it is vital that Cumbria’s farms are enabled to be more profitable, and that both farmers and the public clearly insist that the wider benefits provided and received are acknowledged and properly paid for.