An article by H F Williams in the CIHS Bulletin 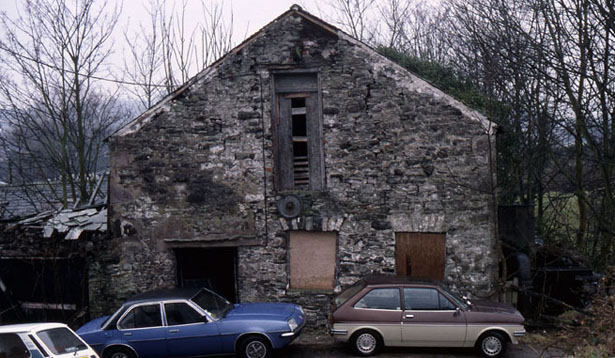 I remember this mill when I lived in Natland Mill Beck Lane in 1916, three houses from the house where lived the miller, a Mr Frear. He worked the mill for J Jordan & Sons until it ceased being used as a corn mill about 1920.

It was driven by a water wheel (overshot) of about 20 feet in diameter. It was a steel structure with wooden spokes. From this water wheel axle another toothed cog wheel inside the building drove a horizontal toothed wheel on a wooden axle, which drove whichever set of stones was required. One set of stones were set at each corner of a high frame about 4 feet from the ground floor of the 3-storey building.

I remember one set of stones was for grinding oil meal from slabs of pressed oil seed. It had to be broken into pieces by a machine on the top storey after it was hoisted there on small pallets through a trap door from the ground floor. It was then put into a hopper over the revolving stones and ground into meal.

Another set of stones was used to make oat meal. This process was started with drying the oats on a kiln which was a building off the ground floor. The oats were spread over tiles which had holes in them, heated by a coke fire below. When the miller thought it dry enough (no instrument to check for water content), he bagged it up, hoisted it to the top floor and shot it into a hopper over a set of stones that just cracked the hard coat from the kernel. From there it went to a dressing machine in the basement which blew the chaff off. The kernels were taken to the top floor and tipped into the hopper to grind into oat meal.

The hoist in the mill was driven by power from the water wheel. A spindle from the horizontal wheel was taken to the top floor and drove the hoist and the machine for cracking the oil cake. The hoist could be operated from any floor and the miller could tell from which floor the bag on the hoist was as the trap door fell into place as it passed through.

The corn or other material was delivered to the door of the mill from a loading bay. Carts were backed down a slope and the rear was level with the ground floor of the mill. It was wheeled into the mill on a sack truck and stacked ready to be milled.

The water to drive the mill was from a stream starting in Spindle Woods and Kendal Parks. There was a mill dam to hold water in dry times between Burton Road and Oxenholme Road. Water was kept to a required height by a sluice on the corner of the new ASDA shopping site. It then flowed under the Burton Road and ran down the north edge of Natland Mill Beck Lane. As it left the culvert under the road it was, and still is, edged by 100 stone blocks. I am led to believe these are old railway sleepers used before the adoption of wooden sleepers on the railway.

In 1920 the Mill, now the property of Colonel W D Crewdson, was converted to generate electricity for Helme Lodge. The wheel had to revolve much faster to get enough speed for the generator. The power not used through the day was stored in batteries to keep the house lit during the night. It was not safe to leave it running without someone near at hand to close the water off to stop the wheel running wild and breaking up.