Compiled by Roger Baker from the research and writings listed at the end. 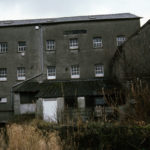 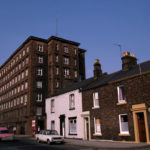 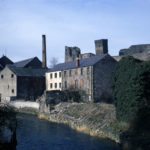 Cumbria is not the first place you would think of to look for evidence of cotton manufacture, but in the early years of the industry water power was king, and the Lake Counties had plenty of it.

Spinning. In the late 1700s, a series of inventions in spinning yarn from raw cotton gave the impetus to the construction of mills to feed the rapidly growing market for cotton cloth. Here was an opportunity to increase production, reduce costs, and make money, even though the raw material had to be imported from afar.

From 1780 to the beginning of 1788, the cotton industry enjoyed a spectacular expansion, and mills built on Arkwright’s principle multiplied from “15 to 20” to over 200. They were built in many parts of the country, from Surrey to Scotland but especially on both sides of the Peak District and the Pennines , where rivers could be harnessed to turn the waterwheels that powered the machinery inside.

A ‘census’ of 1788 listed 208 ‘Arkwright-type’ mills built in the 1770s and 1780s. The list was incomplete, others of the period that were missed have been identified since. In the three counties that have since joined to make Cumbria 10 were listed (updated to 22) – 4 in the Furness district of Lancashire (updated to 5), 5 (updated to 7) in Westmorland, and 1 (updated to 10) in Cumberland. Click here to see the original list and the additions. More were built after the cut-off date for the census. Langthwaite Mill at Warwick Bridge, for example, opened in 1792.

Richard Arkwright’s first mill of 1771 at Cromford in Derbyshire served as the model for the rest in size, design and layout. On average they were about 70ft long by 30ft wide, and 3 or 4 storeys high, sufficient for around 1000 spindles on Arkwright’s water frames installed under licence in the period of his patents. The original 48 spindle frames were superseded by 72s in the late 1780s, and 120s at the turn of the century, meaning that production could be increased without the need to extend the mill or increase the power supply.

Crompton’s mule of 1779 combined the advantages of Arkwright’s frame with Hargreaves’ jenny, and was adapted for steam power in the 1790s. Although hand operated at first they eventually became fully automated, with over 2000 spindles.

Here was “an integrated system of power operated machines”, with drawing, carding and roving on the ground floor, reeling, lapping and finishing at the top, and spinning on the floor(s) between. The mills were usually built under the supervision of itinerant millwrights, although not always – John Carleton, the owner of Yosgill Mill at Brough (built in 1786)went to see mills under construction at  Holywell, North Wales to learn for himself. Others were copies of the buildings, power units and machinery of pioneer concerns.

Yosgill was a four storey mill measuring 72ft by 30ft with over 1100 spindles. Carding and roving took place on the ground floor, with more roving on the next. The top two floors were for the spinning machines. There was a proposal in 1788 to increase the number of spindles to 2,016, but by 1792 the mill had closed even though by then it was employing between 60 and 75 workers.  The mill in nearby Kirkby Stephen had an even shorter life, for only 3 years from 1790.

The owners were usually local men, but often in partnership with others from with a background in cotton. The 1781 partnership at Cockermouth included 3 Manchester merchants, and Dalston (1782) was started by a Manchester man. James Stockdale 1st had previously invested in various industrial ventures before he went into partnership with Joseph Thackeray – “a rascally fustian manufacturer” – to build the mill at Cark in 1782 and produce coarse cotton warp threads on 3,400 spindles by 1790.

At Dalston, a notice in the Carlisle Journal of 16 May 1810 advertised to be let “A large cotton mill built under the direction of Mr. Geo. Hodson of Manchester … It is 3 and 4 storeys high and 102ft by 30ft within the walls, and capable of holding 30 spinning mules of 216 spindles each … carried by a powerful water wheel which is 16ft in diameter and 8ft wide”.

A mill needed between 100 and 200 workers, mostly women and juveniles. In rural areas houses for rent were often built to attract workers. Yosgill owned “at least 4 cottages” but 80 dwellings were built for Backbarrow. Here as well was an ‘apprentice house’ where 140 children were living in 1805 – from workhouses at Whitechapel, Liverpool and Brighton – a cheap and manageable source of labour.

Some mills were converted to steam power in the 1800s, and new ones built. In Carlisle the 6 storey Mains Mill on London Road in Carlisle, built in 1799, was converted to steam in 1819. New Mill (Slater’s) was steam powered from the start in 1802, using a Boulton & Watt engine, eventually running 24,489 mule spindles. Peter Dixon’s Shaddon Mills of 1836 still stands – a 7 storey sandstone building with a 305ft brick chimney, since reduced in height. An early use of steam power was in the south of the county at Cark, where a Boulton & Watt engine was added in 1787 to pump the limited water supply back to the mill dam. The company were later taken to court for infringing the manufacturer’s patent by introducing other ‘pirate’ engines. 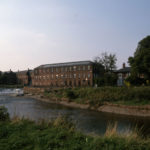 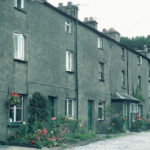 Weaving. Yarn made on machines in the mills was still then woven by hand on looms, either in the home or in shared work spaces called loomshops. Weavers were in demand, and there was a shortage. Less so in existing textile areas such as Carlisle or Cockermouth, more so in isolated rural areas. Mike Davies Shiel tells of the difficult search for weavers for Barley Bridge Mill at Staveley built in 1783/4. The woollen mills of nearby Kendal had already taken on all the available handloom weavers in the area, so Barley Bridge had to look further north around Sedbergh, Kirkby Stephen and Brough for theirs. This meant in turn that there were none available for the proprietor of Yosgill which was built a couple of years later. The weavers they needed were eventually found on the other side of the Pennines at Barnard Castle, where another mill had just closed.

Further north, Longtown had terraces of weavers cottages of 1 and 2 storeys. By 1802 they were weaving for the Carlisle mills. In Carlisle itself, there were loomshops for between 6 and 24 looms in Shaddongate. A notice in the Carlisle Journal of 4 May 1805 advertised the “newly erected buildings called Broadguards and situate in Caldewgate … comprising a 24 loom shop, an 8 loom shop, two 6 loom shops, with 10 rooms above for the residence of weavers”.

Mechanisation of weaving was a long time coming. Power looms only became dominant from the late 1920s after a series of improvements on Cartwright’s invention of 1785. Their weight and reciprocating action made it normal to install them in single storey sheds, although many early power looms were installed in multi-storey mills. Their introduction was a slow process – Peter Dixon & Sons still employed over 3,500 hand loom weavers in 1840, and it wasn’t until 1853 that a weaving shed was added to Shaddon Mill.

Finishing. Before cotton, Carlisle was already a centre for the finishing of cloth – mainly linen at this time – taking advantage of the generous water supply from the city’s rivers, and the land available for the methods of the time. Existing printworks and land were taken over for cotton, although for example a new dyeing and finishing works was built at Holme Head in 1837.

Denton Holme Calico Print Field was advertised in 1819 as having “large and convenient printing shops, dyeing house, drying house, and every other convenience for printing, dyeing and bleaching calico and other cloths; also 18 acres … part of which is used as bleaching and drying grounds”.

There were regular reports of thefts from the fields, as in this report from the Carlisle Journal of 13th April 1811. “On the night of Saturday the sixth a very daring attack was made upon the bleach fields of Mr Robson near this city. At 10 pm the watchman was alarmed by the barking of a chained dog. He observed two men about 50 yards away drawing up from the grass a piece of cotton cloth. Having got pretty near he was bringing his musket to his shoulder when he heard the report of a gun and found himself shot. Being uninjured he shot at the thieves but missed and they fled. Three pieces of cotton cloth were stolen from this field about two weeks before”.

The bleaching process in the 1700s involved washing and steeping the cloth in alkaline solutions – sour milk for example – before laying it out for several weeks on the printfields, a process repeated 5 or 6 times. The development of bleaching powder at the end of the century, and the application of steam power reduced the time needed to little more than a day, and could be completed within the factory buildings.

Stead McAlpin’s printworks at Cummersdale opened in 1835, printing the cloth by hand using blocks at first, with printing machines introduced in 1871 and screen printing after the First World War. The last dye works to be opened was the Murrell Hill Colourworks, built by Alexander Morton & Co in 1918.

These and other businesses operated successfully into the 20th century, although the spinning and weaving of cotton cloth had by then largely died out in Cumbria.