An edited version of an article by John Gavin in the CIHS Newsletter for July 1987, by kind permission of the author 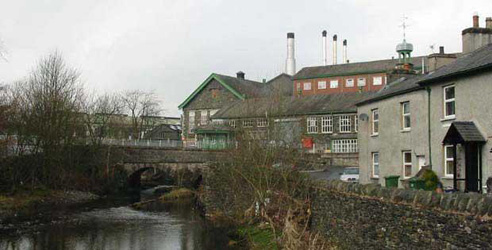 There were four 17th-century paper mills in Cumbria – an indication of enterprise in an area regarded as remote and backward. Cark Mill c.1617 is of note as one of only nine known in England at that time. The mills, probably all ‘brown’ mills, would have manufactured commercial wrappings and mill-board. Milnthorpe had both white and brown mills. The textile industry would have provided the main reason for their location, with a subsidiary local retail market. These mills are all in southern Lakeland: Cark and Milnthorpe on the coast, Ambleside and Troutbeck, close to the market town of Kendal and in an area known to have a thriving cloth industry organised by yeoman merchants.

The next four mills to be established, in the early 18th century, consist of a further three southern mills and the first example from the north. Skelsmergh was close to Kendal and is associated with the Scarisbrick family engaged in leather and drysalter’s trades, the latter still concerned with textiles. Scarisbricks also made paper at Milnthorpe. Starnthwaite, a converted fulling mill, was in a similar environment to Ambleside and only 6 miles from Kendal. Milnthorpe mills were developed by Scarisbrick’s son-in-law, Fletcher Potter, and the Crampton family, while Cark and Troutbeck continued with changes of ownership.

Kirkoswald, the first northern mill, was started before 1720 by a grocer named Smith. His inventory mentions book-binding gear suggesting a combination of commercial and cultural ambitions. Whitehaven was well-established as a port by this time, but Kirkoswald had important road links as well. The mill was later worked by William Crampton on a new site.

Mid 18th century a country-wide boom in paper mills is reflected in the Lake Counties, notably in the north with Low and High Mills at Egremont, Caldbeck, Simonscales (Cockermouth), Maryport and Broadmoor (Ennerdale). White paper was being made although common papers, mill- and scale-board were still important. Printing became established in Kendal, and the first example of vertical integration with paper-making and the book trade occurs, a fore-runner of a century of such activity in Kendal. Thomas Ashburner – bookseller, stationer and printer – converted Cowan Head fulling mill to paper in 1746, a mill that survived until recently as part of the Cropper firm. It is with this period that the ‘Hollander’ rag-beater came into general use, increasing the output by a factor of about 2.5 times, potentially more profitable. Demand was also increasing. The expertise can be identified by the presence of a small group of families: Jones, Crampton and Roberts appear as paper-makers throughout the Lake Counties.

Two short-lived efforts can be noted: at Backbarrow (Scarisbrick’s grandson), and at Southwaite near Cockermouth rather later in the 18th century. This reflects a general slowing down in the founding of new mills and marks the impact of taxation which was beginning to affect the national industry rather than protecting it against foreign imports. Waterhouse Mill, on the River Beela at Beetham, just above the Milnthorpe mills, went against the trend. It has persisted, somewhat unevenly, until the present-day and is now the site of Henry Cooke’s – Paper Makers. The Crampton family also went from strength to strength until tragically early deaths placed the control of Starnthwaite and Milnthorpe mills in the hands of the Pennington family.

Decades passed before the next mills were started well into the 19th century – Branthwaite in the north and Burneside in the south. The first ‘Fourdinier’ paper-making machine in this region (as far as is known) was installed at Burneside  in 1832. It was the successful venture of stationers, book-sellers and printers Hudson and Nicholson of Kendal, and Foster of Kirkby Lonsdale. The first two had already been associated with the Eglin and Roberts paper mill at Starnthwaite.

The effect of introducing machine-made paper is evident. Hand-made mills had to compete with a factory industry which was capable of producing at five times the speed and at lower cost. Milnthorpe, Starnthwaite, Cark and some of the northern mills ceased production. Allenwood was founded as a modern well-equiped mill, others persevered using traditional methods. Ellers paper mill (Ulverston) was an attempt by Eglin and Roberts to move away from the sphere of influence of Burneside. The industry needed to adapt to survive but this required capital investment on a very different scale. There was a succession of bankrupcies.

The repeal of the ‘Taxes on Knowledge’ by Gladstone in 1861 encouraged the establishment of several mills –  Pennybridge in the south by Long who had been a partner at Ellers; Glassonby Beck in the north making “stuff” for the Kirkoswald mill; and Marshside at Workington linked with Branthwaite. The trend was for fewer but larger mills. Steam power altered the need for a site supplied with water for power, although water was still a requirement.

The machines incorporated more the of the paper-making process and became ever wider and faster. New materials – essential as the supply of rags could not possibly keep up with demand – and the associated technology were features of the latter part of the 19th century. Barrow Mill was built to deal with wood pulp for paper making. Consolidation of the mills continued and can be seen in the building or conversion of premises: Bowston Bridge added to Cowan Head and Burneside for James Cropper and Sons; Halfpenny Mill for Waterhouse. Kirkoswald continued in Glassonby Beck which closed in its turn as the same firm – Thompson’s – continued at Little Salkeld.

Twenty-five paper mills worked during the 19th century; five firms continued into the 20th century; three have continued to the present day and are still going strong making specialist papers to continue nearly 400 years of a Cumbrian paper-making tradition.

Visual history
Click on this heading to see a chronograph of paper-mills in Cumbria from 1600 to the present day.