The text and main photo are from an article by William Varley in the CIHS Bulletin, August 2013. The other six photos are from the MDS collection, and taken by Mike Davies-Shiel. 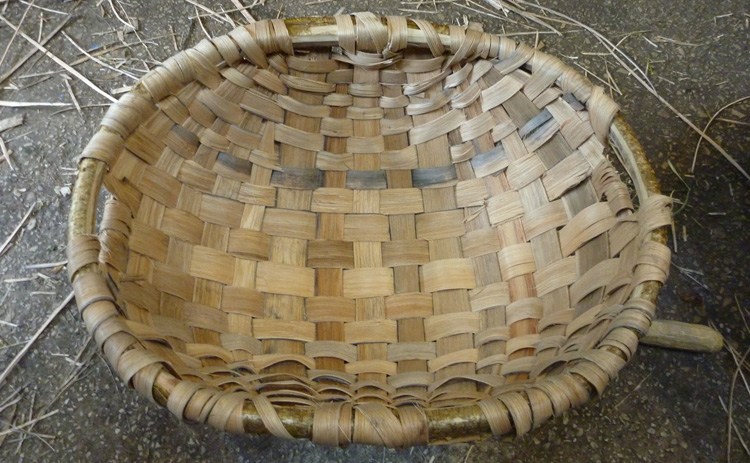 Swill making was one of the many woodland industries of Furness which thrived in the 19th and early part of the 20th centuries. Swills are oval-shaped, shallow baskets made of oak strips woven on a hazel rim. Swills were used wherever a strong container was needed; they were used on farms for potato picking and feeding stock, carrying bobbins and cotton in mills, coaling ships and domestically for carrying items such as laundry, firewood and refuse. A long-held ambition to make a swill was realised last summer when I joined six other ‘apprentices’ assembled in the hamlet of High Nibthwaite on a bright sunny morning in August 2012. After a coffee Owen, the swill maker and tutor, talked us through the three days of the course and gave a brief history of swill making.

Before us on the ground were half a dozen trunks of newly felled oak, each 5 or 6 feet in length and 6 or 7 inches in diameter. The oak is coppiced on 25-year cycle to give maximum production. Our first task was to saw and split the oak. We soon became aware of the swillmaker’s expertise and understanding of the material. Careful examination of the lengths of oak would determine whether it was best to saw into lengths or to split it first. Knots and uneven growth were to be avoided whilst trying to get out optimum lengths of woods. Precise lengths were needed for the different spelks and taws which would make up the basket and so a measuring stick was used to mark the saw cuts. To split the logs a large axe, heavy wooden mallet, steel wedges and a throw or lat axe were available. With these tools splitting of the wood could no doubt have been eventually accomplished with simple brute force; but through proper use of the tools, careful placing of the body and application of pressure the large logs were split with a minimum of effort. The logs were first halved and quartered lengthways and then the heartwood of each segment was sliced off. Each length or billet was then trimmed and tidied using the throw and a knocker, a round wooden mallet. Working for a couple of hours, between us we had prepared sufficient materials for ten swills.

The oak billets were placed in a large rectangular iron boiler and covered with water. A fire of shavings and offcuts was lit. The water would take a couple of hours to boil and was then kept on a rolling boil for two hours. The billets were left in the water overnight and the fire relit in the morning so the wood came from hot water to be worked. 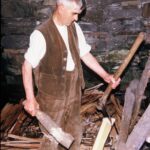 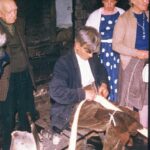 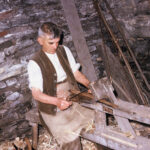 The bool makes up the top of the swill. It is the frame on which the swill is woven and forms the carrying handles of the finished basket. We each selected a hazel rod of about 1¼ or 1½ inches diameter which would form the bool of our swill. This had to be trimmed and shaped and to do this we used the swiller’s mare.

The mare is a foot-operated vice which holds wood firmly. Sitting astride the mare the wood is held by a large wooden block on the bench in front of you, it can then be shaped using a two handled draw knife. The bool was first cut to length and then, on the mare, each end was bevelled so they could form an overlapping joint and the inside surface had to be shaved flat. Taking account of the way the rod had grown and anticipating the final curved oval of the bool, the natural curve or the belly of the rod determined how it was shaped and where the bevels would be cut.

Next morning when the fire was relit the bool rods were placed on logs in the boiler above the water to be steamed ready for bending. After about half an hour steaming the rod was bent round a substantial wooden frame, held in place by pegs and then the overlap nailed with two swill nails. These narrow gauge nails are still available and known as ‘swill nails’ in the local ironmongers (but probably not at B&Q!). Using a large triangular framed set horse pressure was applied to make the bool a regular oval and then the ends were bent up to give the whole thing a shape reminiscent of the Olympic velodrome better to take the tension of the weaving.

Our next task was to learn to rive. Riving or splitting the oak billets to make the spelks (‘k’ is silent), which run across the basket; and the taws, which run the length of the basket. The billets, stained black from the tannin, were taken hot from the boiler. The strip of bark on each was easily peeled away; it had a warm, deep, fruity aroma. The billets were split tangentially to the growth rings. A riving knife and knocker were used to start the split at the top of the billet; the knife was hammered in just a few inches. Once the split had been started various techniques could be used to split the two halves further. It was easy to see what to do; the skill was in developing a feel for the wood and careful technique. The aim was to have two halves of equal strength and working with the two halves applying gentle force to draw them apart. With practice it became possible to pull on the stronger half and so to transfer the strength into the weaker half to try to keep them even. This process was repeated until the pieces of oak got thinner and thinner. The aim was to have pieces just between an eighth and a sixteenth of an inch thick, one and a half to two inches wide and of varying lengths up to about six feet. 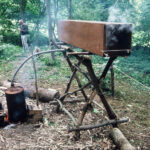 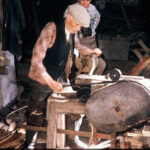 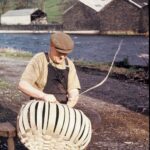 The 15 spelks which run across the short axis of the oval and are of varying lengths. These had to be dressed and shaped on the mare. Dressing involved removing rough uneven sections and ensuring they were a constant thickness. Some of spelks were made parallel and some had to be made crescent shaped. Each spelk was bent to ensure it could take the shape it would need to fit in the basket. The taws, the long strips which run the length of the basket, were riven and dressed on a leather kneepad. This involved holding a knife steady and pulling the taw against it to remove any unevenness. Bundles of spelks and taws were tied up and put in an adjacent stream to keep them damp so they would remain more flexible and be easier to weave.

The lapping spelk is the first spelk to be attached to the bool. Bent over the bool it is held in place with strips of oak. The first bottom spelks were then threaded into the weaving. The next spelks, the second bottom spelks, were attached by splitting the bool using a sharp metal tool, a bodkin. It was an anxious time as the bodkin was forced into the bool, horizontal and not too deep. We could then begin to weave the taws at each side to fix the spelks and keep them properly spaced. Spelks were added as the weaving progressed. The taws were taken in and out between the spelks and “twice round the bool”. A twist with the wrist as the taws went round the bool kept the weave tight and the weave was also knocked tight with the bodkin and knocker. Six more spelks had to be fitted, pushed in between existing spelks and threaded into the weave. It was important to maintain the alignment of the spelks to leave spaces between each for weaving and to maintain a good bowl shape and the edges of some spelks and taws had to be pared down as weaving progressed.

Taws were carefully overlapped and the joins hidden beneath spelks. Handle spaces were pared back; neat twists were put into taws to form the sides of the handle spaces. As weaving progressed and we became more familiar with materials and technique and fears of damaging the bool or splitting or breaking the spelks and taws was overcome. The oak is tremendously strong and as we worked we became more confident at pushing and hitting the weaving or tapping it with bodkin and knocker. The final taws were carefully trimmed to equal widths to ensure symmetry of the finished basket and then woven together and overlapped to give extra strength.

Making a swill is a totally absorbing activity. Learning and practicing techniques, one realises why they are as they are and indeed how clever were the craftsmen who devised them. Even in a very short time working with the oak and hazel one developed a feel for the materials. Real apprentices would have spent many years learning their trade; we ‘three day apprentices’ developed a huge admiration for the craftsmen of old. We were very grateful for the generosity and guidance of our expert tutor who shared his skills so freely. And we are all extremely proud of our finished swills!