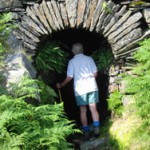 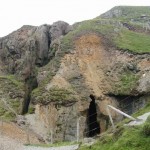 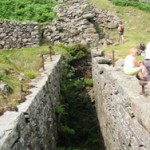 The copper mines of the Lake District are to be found almost entirely in the Skiddaw slates. One notable exception is the Coniston Copper mines, which lie within a volcanic area of hard rhyolite. The mineral deposits found within both these areas occur in the faults and fissures caused by upward pressures of an underlying granite mass, and filled by circulating mineral-bearing solutions. Owing to the almost vertical inclination of these faults, the mines developed on the richer ore bearing ones went very deep – 700ft at Goldscope and over 1600 ft at Coniston. These sorts of depths presented considerable problems to the miners.

It is generally accepted that the mining of copper in Lakeland did not start in any significant way until the arrival of mining experts from Germany in 1563. The richest copper mine known at that time was named by the Germans ‘Gottesgab’ – God’s Gift – which became corrupted into Goldscope, the name it is known by today. They started there at Easter 1556, working on a vein up to 9 ft thick. By 1568 the Company of Mines Royal had been formed, and the mines of the Caldbeck Fells received a first mention in their accounts for this year.

The Company spent lavishly in the locality of Keswick. Smelt mills were erected to treat the ore, and a whole network of packhorse trails was set up to transport the ores and the charcoal to smelt them. To produce the charcoal, Borrowdale, along with other valleys, was denuded of its trees, but prosperity was brought to many whose previous existence had been limited to scraping a living from fell farming or simple rural trades.

The Keswick Journal for 1659 contains reference to the Germans working a copper mine on the west shore of Buttermere, and this can still be traced today. In the Newlands Valley other copper mines worked at this time included Dalehead, Castlenook and the nearby Longwork and St Thomas’ Work. Over the rideg of Maiden Moor to the east in Borrowdale 2 copper veins had not escaped the notice of the Mines Royal. These were the Manesty Vein, otherwise known as the Saltwell Mine, and the other the Copperplate Vein not far from Grange in Borrowdale.

The largest production area for copper other than Goldscope would undoubtedly be in the Caldbeck Fells. Some of the larger mines were Roughton Gill Mine, Mexico Mine, Silver Gill Mine and Red Gill Mine. The latter is famous for its rare, deep azure blue crystals of linarite, a sulphate of copper and lead, specimens of which can be seen in the Natural History Museum.

It was some time after 1590 that the Company of Mines Royal discovered, or rediscovered, some of the numerous and extensive copper veins at Coniston. Traces of their work can still be seen in the lower and upper parts of Red Dell, in the form of hand driven ‘coffin’ shaped levels. Mining continued until the outbreak of civil war in 1642, but little seems to have been done during the rest of the 17th century, although Greenburn Mine in Little Langdale appears as a producer of copper for the first time.

This lean period continued throughout the first half of the 18th century. However, in 1758, the Macclesfield Copper Company was formed and spent the next 37 years working on the rich Bonsor Vein at Coniston, taking it down below the old German workings which were in excess of 150 ft below the surface. Work was also going on at Paddy End and Tilberthwaite mines during this period. With gunpowder now in general use, the driving of tunnels and winning of ore was speeded up considerably. By 1795 the workings had reached a depth in excess of 300 ft below the surface and they decided, wrongly as it proved later, to abandon the mine as unproductive.

The man who proved them wrong was John Taylor, the famous mining engineer, who had extensive experience in the mining fields of Devon, Cornwall and Derbyshire. He came to Coniston in 1824 and was to transform the mines into the largest and most profitable copper mines in the north. Taylor was soon driving new access tunnels to the Bonsor Vein in Red Dell, and in the Paddy End Mine below the old German workings, and in 1825 started his most ambitious and expensive project – the driving of a deep adit level from the lowest practical point, behind the present day youth hostel. This adit level became known as the Deep or Horse Level which, within the various branches, was to become one and a half miles long and de-watered the vast area of the workings. It also served as an excellent tramway for horse-drawn wagons from all parts of the mine.

Elsewhere in Lakeland copper mines were on the decline once again. Goldscope was still working but producing only lead. A small tonnage of copper was recorded from the Roughton Gill mines, and the Copperplate Mine in Borrowdale was re-opened but little was done. Birkside Gill Mine above the waterfall north of Dunmail Raise was in production, as were two small copper mines near the northern end of Hawes Water. Much prospecting was going on in the Duddon Valley at the following mines – Seathwaite Tarn, Cockley Beck, Logan Beck, Hesk Fell and Ulpha Copper Mine. The last two were probably the only ones to show a profit.

At Coniston the mine was reaching its peak period. In 1849 the workings were down to 90 fathoms (540 feet) below Deep Level. The following year driving began of another deep level, this one in Tilberthwaite, to de-water the old workings in the high valley to the east of Wetherlam. Named Barratt’s Level after the mine manager, it was 3000 ft long and took ten years to complete. 1856 was the year of the highest production figures for Coniston mines. Output was 3659 tons of ore valued at £27,861.

The mines were so productive that it was decided in 1858 to construct a branch line from the Furness Railway at Foxfield, thus doing away with the slow, laborious carting and boating of ore via Coniston Water to Ulverston Canal. This means of transport had been in use since the destruction of the Keswick smelters in the mid-seventeenth century. The railway line opened on 18th June 1859

During the 1860s, however, the output of copper ore began and irreversible decline. In 1860 it was less than 3000 tons of dressed copper, and four years later had dipped below 2000 tons. The workings on the great Bonsor Vein were so deep that the cost of maintaining services, hoisting, timberwork and pumping etc was mounting. Up to 16 waterwheels were said to be operating around 1870. To add to the problems an increasing amount of magnetite was mixed with the ore below the 170 fathom level, which was very difficult to separate during dressing operations at that time. Elsewhere in the Lake District copper mining had almost ceased.

The fate of copper mining in Lakeland was sealed in the 1880s when cheap imported ore was brought from foreign lands. Even advances in technology – dynamite had been in use since 1877, and compressed air drills in 1883 – were of no avail. The Old Engine Shaft Wheel was stopped for the last time in 1897 after the robbing of ore pillars below Deep Level had been carried out, leaving the mine in a dangerous state. In the same year the New Engine Shaft wheel and associated machinery was dismantled. Extraction of any ore left in the higher and older workings, both at Paddy End and Red Dell, carried on until the turn of the century.

In 1908 a French company set up and electrolytic plant to process the extensive spoil heaps. This lasted until the outbreak of the First World War in 1914. The remaining waterwheels were removed for scrap in the 1930s, the last in 1939 from the Bonsor Upper Mill. Apart from some prospecting work in the early 1950s, nothing more has been done. The mines were left to decay – a permanent reminder of the prosperous past, of the employment they provided and the influence they had on the development of various Lakeland communities and Coniston village in particular.

MORE SITES TO VISIT
Photos and information about the Coniston mines on the Mine Explorer website
Coniston mining history, trails and a reconstruction on the National Park website
Click here to see a list of Cumbrian copper sites