A shortened version of The Linen Industry in North Lancashire and Cumbria, 1660-1830 by Margaret Robinson in A History of Linen in the North West, by kind permission of the author 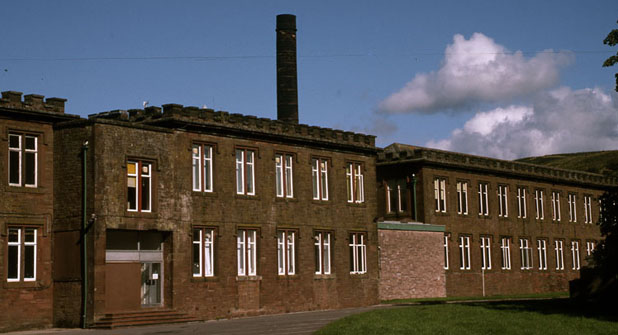 Flax and hemp had been grown in the north west for centuries. (Click here to find out more). The growing of hemp was more common than that of flax, particularly in North Lancashire and West Cumberland. It was, however, never enough to meet demand throughout the period, and extra supplies were imported, mostly from Archangel and the Baltic ports of Riga, Narva and St.Petersburg. This trade was profitable, but profits were counterbalanced by various hazards. Bad weather caught many ships as they passed to the north of Scotland, and the trade was limited to the late summer, after the flax harvest but before the the winter set in.

Subsistence production, in and for the home, was widespread in the region at the start of this period. Throughout most of the eighteenth century, yarn spinning for commercial employers crept further north; by the 1740s merchants in Garstang and Lancaster to the south were putting-out spinning, and Furness was similarly employed a little later.

Linen was made in factories well before the application of power to spinning. The earliest linen factory known in the North-West dates from 1742. This was the factory at Lowther in Westmorland, intended to make plain linens for export to the West Indies and to provide employment and example to local farmers and labourers. Some flax was grown in the district and some bought in. It was prepared by a flaxdresser employed at the factory, and put out to be spun. Spinning wheels were distributed, and between 70 and 90 households employed at different times to produce yarn. This went to specialists to wash and bleach, returning to the factory for weaving and going out again to the calendered.

As elsewhere at the time, the biggest problem faced at Lowther was that of regular yarn supply. However in 1787, John Kendrew of Darlington filed a patent for a flax-spinning machine which would eventually, with refinement, put paid to troubles with yarn supply. Kendrew had religious and family ties with this area; certainly his fellow Quakers trading in the North-West were quick to take up machine spinning, several of the biggest mills being Quaker owned. These manufacturers included Jonathan and William Harris at Derwent Mills, Cockermouth, and Joseph Waithman of Holme Mill, Milnthorpe.

A map of flax mills between 1790 and 1830 shows a considerable number of establishments, many of which were well away from population centres and some of them very small. Eller Mill, Ulverston, had 216 spindles on water frames and 200 on hand frames. Goat Mill in Papcastle had 500 spindles. Henry Birley’s mill at Egremont, much admired by John Marshall in 1800, and the biggest in West Cumbria at the time, had 1500 spindles. Compare this with the 4500 spindles spinning cotton at Cark in 1810, the 3600 at Dalston in 1793, and the massive 30240 at Carlisle in 1804. As a result of the prior development of cotton spinning, prices of cotton dropped and cotton captured the popular market while linen manufacturers were still struggling with their process. The early 19th century saw very many bankruptcies in the region, and those mills in good shape were comparatively large businesses.

Some mills were owned by the management, as were Henry Birley’s mills at Cleator and Egremont. Others were owned by outsiders with no interest in the industry – Eller Mill at Ulverston, for example, was owned by William Harrison, a surgeon. Some ran on water power, some on steam, size being no indicator. Derwent Mill used water throughout the period, while Oldfield Mill in Greysouthen had gone over to steam by 1808. Many mills used child labour, advertising for “large families on children” as well as overseers to instruct them. Conditions in the cotton mills were notoriously bad, and flax mills were no better.

The linen produced was intended for three types of market – linens for export, those for the home market, and industrial linens. The first two categories were subject to changes in fashion and, by the last quarter of the 18th century, to competition from cotton. The third, comprising sailcloth, packaging, ropes, twine and nets, was not challenged by changing technology or cheaper substitutes until the middle of the 19th century. Government policy – restricting colonial trade to the home country and discouraging colonial manufactures – encouraged the linen industry to expand in the region, whose ports enjoyed a lively colonial trade. At home, the variety of textiles available in the shops increased after 1750. James Ryley of Whitehaven stocked checks, stripes, coarse and fine linen, huckabacks and canvas for sailors’ trousers, while Thomas Burton, an upholsterer, kept blind canvas, fringes, lines and tassels, matting and carpeting. The main industrial product was sailcloth, used by the shipbuilders of Lancaster and Whitehaven, and also of Ulverston and the numerous small havens to the north of Morecambe Bay.